Abby Reads: The Year of Reading Dangerously: How Fifty Great Books (and Two Not-So-Great Ones) Saved My Life by Andy Miller

The Year of Reading Dangerously: How Fifty Great Books (and Two Not-So-Great Ones) Saved My Life by Andy Miller
Harper Perenniel, 2014, 352 pages
Nonfiction

When he realized he had effectively stopped reading for pleasure, Andy Miller knew he had to do something about it. He began a short list of novels he’d always wanted to read, from classics to popular fiction, and started in on it. Before long, he’d caught the reading bug again and added to his list, deeming it 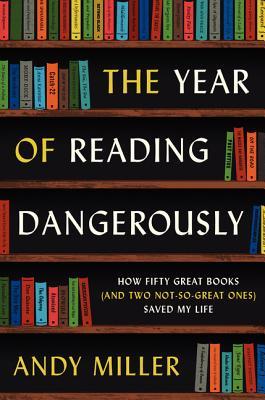 the List of Betterment. In The Year of Reading Dangerously: How Fifty Great Books (and Two Not-So-Great Ones) Saved My Life, Andy Miller discusses his journey through literature, espousing his feelings on classics such as Moby Dick and War and Peace alongside his disdain for The Da Vinci Code and Middlemarch.

The Year of Reading Dangerously is, sadly, poorly titled. Miller’s stories about books are hardly tales of how they saved his life and he refrains from visiting each of the fifty-two books promised in the title. While the discussion of how Miller came to read the books featured is engaging enough, Miller doesn’t deliver on the title, if that’s what you’re looking for.

But moving on. In terms of the actual content of the book, it’s decidedly British. Full of dry humor, Miller’s anecdotes are sometimes self-deprecating, sometimes depreciative of the material he reads. That he’s able to maintain the humor throughout the book — which is fairly lengthy, given how he chooses to go about the topic — is impressive. Both in-text and in footnotes, Miller injects dry, and often sarcastic humor throughout, both at his own expense and at the expense of the books he reads. While I’m not one to usually pick up on humor in books — to give you a sense of how bad it is, I really didn’t get The Hitchhiker’s Guide to the Galaxy — it was well-placed and written here, allowing even me to laugh at passages.

Speaking of the footnotes, they did become a bit much. Though some of them certainly add to the book as a whole, many of them felt egregious and superfluous. Plus, two chapters themselves felt like footnotes. The first of these is a fan letter to an author Miller admires. He admits in this chapter that, were he the editor of the book, he would cut it. It’s long and rambling and doesn’t seem to connect well with the rest of the material and I have to say I agree that it didn’t belong in this work. Another chapter — the last — is an epilogue about Miller’s relationship with Douglas Adams and his most famous work, The Hitchhiker’s Guide to the Galaxy. While the content of this chapter was a lovely tribute to Adams and his novel, it ultimately felt out of place and far more specific than all the other sections of the book.

Overall, reading about books with which you’re already familiar is more fun — at least, this was what I found in The Year of Reading Dangerously. Chapters about books I hadn’t read myself felt tedious and long, as I couldn’t pick up on much of what Miller described. Although he does a decent job at providing what information the reader needs to get through those chapters where they haven’t read that book, there still seems to be something missing that can only be gained by reading the original material.

The Year of Reading Dangerously might not deliver on its title, but it’s a reasonably fun read for book-lovers who will see themselves reflected in Miller’s descriptions of himself, even as he laments the challenges of reading. Though it’s a bit on the long side, it generally reads quickly and might give you some inspiration to pick up a book that’s been hanging over your head for years or avoid ones you thought you’d always want to get your hands on.

Pro Talk: How to Find a Book You’ve Forgotten: Tips from a Librarian