After a bodiless voice tells him to do it, Ray Kinsella turns his farmland into a baseball diamond, where he awaits the appearance of long-dead Shoeless Joe Jackson in W. P. Kinsella’s Shoeless Joe. When Jackson shows up, Ray knows this is not the end of this wild spiritual journey. Instead, he is compelled 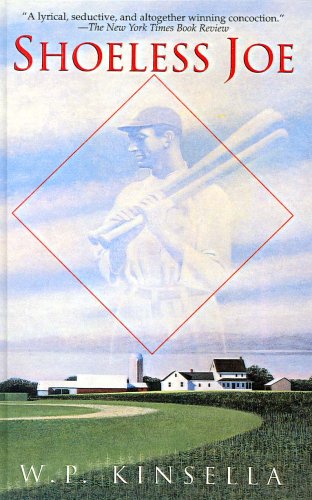 to drive from Iowa to New Hampshire in search of the recluse J. D. Salinger, at which point he will take Salinger to a Red Sox game and — well, who knows. Driven by complicated feelings about his upbringing and a desire to be a part of something bigger than himself, Ray travels halfway across the country and finds there’s more to baseball than he ever imagined.

I realize naming a character Ray Kinsella has narrative value in that it’s relevant to the J. D. Salinger connection (read the book for more information on that), but it felt pretty ridiculous reading a novel in which the author shared the main character’s last name. I think most of us can agree that male writers tend to do a lot of self-insertion (and, true, writers of all genders do, but it seems the men deny it to an extra degree), but this felt especially egregious. In any case, the name was distracting, especially as it appeared as a Point again and again.

The danger of putting Ray on a quest for Salinger and him rolling over in his doubts for hundreds of miles of driving is that the story can be monotonous at times. Typically by himself, Ray has little cause for dialog and primarily ruminates on his baseball field, its implications, sometimes his family (both the one he was born into and the one he’s created). He makes sweeping observations about American life and leisure, which can be interesting, if a bit pretentious at times. And, perhaps predictably, Ray falls into the unfortunate state of racism and sexism on occasion. One particular scene troubled me, in which Ray purchases a gun. In an exchange with a gun shop clerk, Ray and the clerk discuss how the neighborhood has changed “if you know what I mean.” Kinsella — both author and narrator — need say no more for modern readers, at least, to pick up on the fact that the reference, here, is to people of color moving into the neighborhood, particularly with the context around this scene. It’s a shame. Although I’m not one to believe a book must eschew racism outright, I do believe it ought to have a purpose if it is going to appear. In this case, the conversation was nothing but filler, rendering it as just a vehicle for racism. In many other scenes, Ray’s focus is on his wife’s body, her little girlishness, his daughter’s similar innocence, and other dehumanizing aspects of the few women present in the story — again, to no real point.

Though these moments might do little to illustrate any consequential character traits (at least insofar as they’re related to the narrative), Kinsella does an otherwise fine job of developing the inhabitants of Shoeless Joe. Both J. D. Salinger and Moonlight Graham are especially good examples of characterization well done. They are complex individuals with motivations and desires, developed to the point of realism. While I don’t know enough about Salinger’s personal life story (beyond the usual facts of reclusiveness and rumors) to imagine this characterization was either well-researched or accurate, it certainly comes across as reasonably real.

Shoeless Joe has been, in my experience, surprisingly overlooked as a piece of good literature. Capital-L Literature, even. The novel is slow-paced, to be sure, and not a whole lot happens. But the prose is delicious to turn over in most passages, and there’s no doubt Kinsella-the-author does a fantastic job at weaving magic and realism into a seamless example of magical realism. None of it seemed so outlandish that it couldn’t be, particularly in the very sacred context of baseball. Like lots of Literature, it does at times seem pretentious and lofty, but it’s the tolerable kind that adds to the story, rather than detracting from it. Even if you’re not a fan of baseball, Shoeless Joe provides another look at the American Dream, wanting to be a part of something bigger than yourself, and the concept of spiritualism — and, it’s worth reading just to compare to the movie adaptation, Field of Dreams.

Abby Reads: Out of My Mind by Sharon Draper